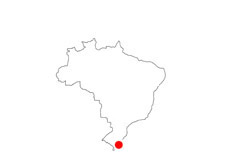 Oceanário Brasil – an Educational, Scientific, Technological and Tourist Development Complex – situated in the port city of Rio Grande / RS, in the southernmost part of the country.

The oldest city in the State, due to its historical vocation and geographical position – bathed by the waters of the Atlantic Ocean, Laguna dos Patos and Lagoas Mirim and Mangueira – Rio Grande has always been closely linked to the sea. Its 240km long Cassino beach is the largest in the world, surpassing the frontiers in Chuí and advancing over Uruguay.

FURG – Federal University of Rio Grande, creator of the first Oceanography Course of the country, Oceanário Brasil aims to be an important center of research, studies and dissemination of Oceans, rather than just strengthening the relationship between the city, sea and Oceanography in Brazil.

Its spaces of visitation, proposed along a linear and continuous route, are organized in four georeferenced wings, symbolizing the aquatic environments of the South, East, North and West of Brazil, and a Central Wing, representing the Ocean.