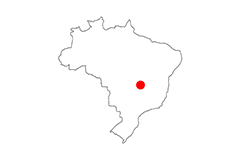 The Arena BSB Sports, Leisure, Entertainment and Cultural Complex is part of a significant area of the North Sports Recreation Sector – SRPN – in Brasilia, Brazil. Currently its occupation by buildings and sports equipment for public use is partial, unfinished and fragmented by discontinuous voids that fray and break with the unitary reading of its territory.

This area, mostly bordered by the Monumental Axis and Via Autódromo-Estádio, is centrally and strategically located in the city. As the kneecap of an axis transverse to the Monumental Axis, it aligns the Sarah Kubitschek City Park on the South Wing with the Burle Marx Ecological Park between the North Wing and the Northwest Sector.

We propose a restorative territory design, which aligns and unifies existing spaces and buildings with those required by the new demands, in order to build a unitary, continuous and highly enjoyable urban fabric.

We think of an inclusive project, receptive and generous in its reception and use. A non-intimidating project that offers dynamic spaces that interpolate and connect with each other, giving users the toggle and full enjoyment of their activities.

We think of spaces that reproduce and reinterpret the characteristics of the city, such as the organicity, the spatial continuities, the volumetric varieties of its built elements and the rich and unexpected visual perspectives of its streets and squares.

We think of the area as a large park of metropolitan scale, receptive and transformative of the urban environment, which goes beyond its physical limits and intertwines with the continuums of the city.

Finally, we think of intervention as a major milestone, not because of the monumentality that Brasília is already served, but, on the contrary, because of its protective scale, which recognizes the citizen as an active participant.

A SEQUENCE OF SPACES

From the zoning guidelines, we interpret the Boulevard as a sequence of structured spaces along a large longitudinal axis (Linear Path) of pedestrian circulation. This route, event generator and landscape regulator, sequentially connects and distributes the spaces and diversified activities of the Boulevard and the areas dedicated to leisure and sports.

A second circulation axis (Hybrid Path), transverse to the Linear Path, connects the Monumental Axis to the Autodrome-Stadium Road. Its function is twofold: to receive and lead to the Boulevard the pedestrian visitors coming from the Monumental Axis and, in a controlled and selective way, to offer motorized access to the infrastructure of the Complex.